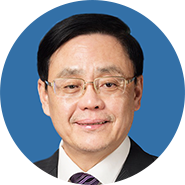 Next Person
HE Wei

HE Wei is currently the Vice Chairperson of the 13th National Committee of the Chinese People's Political Consultative Conference (CPPCC) and Executive Vice Chairman of the Central Committee of the Chinese Peasants and Workers Democratic Party, who also hold the position of professor, Ph.D. advisors, and Director of Institute of Basic Medical Science of Chinese Academy of Medical Science (CAMS) and the department of immunology, Institute of Basic Medical Science of Peking Union Medical College (PUMC). HE Wei graduated from Heidelberg University in German, majoring in theoretical medicine, and has received a Doctor of Medicine in immunology. HE Wei once served as the Director-General of the Department of Science and Technology Education in Ministry of Health of PRC, Vice President of Chinese Academy of Medical Science (CAMS) and Peking Union Medical College (PUMC), and Director of Management Office of National Science and Technology Major Project for Major New Drug Research and Development. HE Wei presided over the National Natural Science Foundation of China, 973 Program and 863 Program, devoting himself to the study on T cell receptor recognition, diagnosis, treatment and mechanism of tumor immunology, anti-infection immunity and Immunosenescence. HE Wei specializes in the research on γδT cell trait and its function with over 60 published SCI papers. HE Wei has won two second prizes of The State Scientific and Technological Progress Award and one prize of Provincial Scientific and Technological Progress Award.