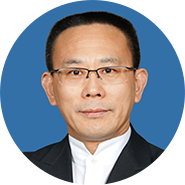 Pengsong Ji is a professor at Tsinghua University. He has received several professional degrees from Tsinghua University, including a double bachelor's degree in Engineering Physics and computer software, a master's degree in nuclear electronics and detection technology, and an MBA in finance. He has received National 11-5 High-Tech Outstanding Award. He is well known as a legend and holding many executives positions in multiple high-tech companies. Mr Ji is a pioneer on high-tech incubator in China. Of the 17 hi-tech projects he hatched, 8 have already been financed and listed.

In 2009, he began to focus on the development, production and popularization of digestive tract capsule endoscopy. Its technology leads the world for 5 years. After nearly ten years of efforts, He has built an annual production line of millions of products in Wuhan and Shanghai，he completed the comprehensive construction on the technology platform of Ankon，it is an important technology platform for cancer prevention and control.